Home »Most Recent»3. ANATOMY OF A MOVEMENT:REINVENTING THE FOOT SOLDIER

As with most military units, especially the infantry, they can trace their lineage back to a young America when only infantry and artilery were available. The 199th infantry is made up of such units and goes back to post-War of Independence. My unit, Delta-5-12, nicknamed “The Warriors” goes back through numerous army reorganizations to 1798. During the War of 1812 it took part in the battle of Fort McHenry, MD and fought during the Mexican War. During the Civil War it did battle at Antietam, Fredricksburg, and Gettysburg and during WWII it landed at Normandy. The 4th and 5th battalions joined together to add to the history of the 199th in June 1966 and April 1968 repectively. Renamed “The Redcatchers” the 199th took on a new look for a new world and a changing battlefield. Light – Swift – Accurate became its mantra, as it led the charge on many covert operations. 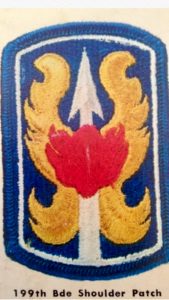 OPERATION UNIONTOWN:
As the war mushroomed it was apparent this was not the typical scenario of two armies fighting head to head. New tactics were employed by the enemies guirrilla forces which called for a change in strategy. Operation Uniontown called for a light infantry concept capable of rapid deployment with minimal equipment and fire support assets on call. The unit would have aviation transport and logistical and artillery support from existing forces in Vietnam.

The unit was mobilized at Fort Benning Georgia, the infantry’s army center, and arrived at the port of Vung Tau, South Vietnam in December 1967. The unit immediately supported the 11th Armored Calvary (Black Horse) in War Zone C and engaged Vietcong on its first mission. The Recatchers played a key role in both the 1968 and 1969 Tet Offensive in the Greater Saigon and Mekong Delta region. In 1969 the unit was deployed to the Vietnam-Cambodian border on special operations. In 1970 the 199th combined with the 196th to form the Americal Division in Quang Ngai Provimce where it remained for the duration of the war.

In four short years the Redcatchers became an integral part of the war effort. Their Light-Swift-Accurate motto served as an example of the new rules of engagement. As a tribute to the capable fighting abilities of the 199th a government publication was put out to honor this unit and I was fortunate enough to grace the cover. As we were sweeping through a Vietcong village we worked our way through the dense undergrowth helping each other along the way. The road to the village was booby-trapped so we had no choice but to do it the hard way. An embedded reporter took this picture, I am on the right waist deep in mud being pulled out by a fellow soldier.

Our unit establishing itself as a formidable fighting force called for exceptional leaders. We had the distinction of having two famous generals leading our charge. General Frederic Davison was the only African-American General in Vietnam and only the third African-American General in U.S. History. His famous quote told time and time again was, “the only color recognized here is Army Green”. 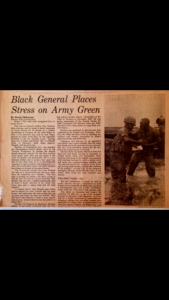 Following General Davison was General William Bond. On April 1, 1970, Genetal Bond had the dubious distinction of being the only general to die in direct ground combat during the Vietnam War. Wounded in the chest he died on the way to the field hospital. Bond’s helicopter landed near heavey ground fighting between elements of the 199th’s Delta 5-12, my unit, and the 33rd NVA Regiment. Delta unit also received heavey casualties.

This letter was found in PVT Ward’s personal items after he returned home. It’s addressed to Ward’s mother stating of the Generals death. It was in response to a letter she sent him and it was signed by the generals secretary. Ward was a personal friend in my unit. 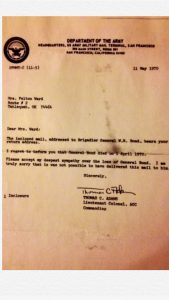 The Redcatchers established themselves early with an unmistakable identity of quality fighters. But within this unit Delta established itself with its own unmistakable identity. We were considered the go to guys or the badboys of the unit. Whenever there was dirty work to be done it was Delta to the rescue. At times it seemed as though there was no one else in the unit and we were always on call to a job that no one else wanted which meant it was extremely dangerous.

Our unit was broken down into small six man squads which went out on missions alone. We were a formidable force and throughout the Vietnam Experience I will be referring to people by name. So as not to confuse the reader I will introduce them. Tom Burke or “Philadelphia” our radio operator was the control freak. He knew ever password and code for every day of the year and could call in an air strike on a moments notice. Sid Ward or “Oklahoma” or “Okie” was the muscle. This farm boy had Popeye arms and could hack his way through the jungle like butter. Peter Frazzetto a childhood friend had attitude and trouble was his middle name but could read a topographical map with ease. It came in handy when we were out of position in a village partying. Dave Baron or “Chicago” was the gopher and could requisition, that’s a nice word for stealing, needed supplies. We always had an alternate to round out the team if someone ever volunteered. Then there was me the brains of the outfit so that right there was an indication we were in trouble from the start. I volunteered for every mission no one wanted being thrill seeker at heart. This group went out alone for days at a time and night ambushes miles from any other units without back up. Fearless or stupid whichever you prefer we got the job done and we were the bad boys of Delta as headquarters would later find out.

Area of Operations: North Saigon
During the 1968 Tet Offensive Long Binh was attacked by a Vietcong regiment and sustained heavy looses. Long Binh established in 1967 was just 20 miles north of Saigon and was a center of command operations. The communist just outside the city targeting Long Binh because of its military  importance. This huge compound housed command units, logistics, medical, and administration centers for all troops operating in the southern provinces. It also contained the U.S. military prison known as Long Binh Jail (LBJ) and boasted a rail yard and housing for 50,000 troops arriving and leaving Vietnam.  The 199th under heavy attack by a regiment sized force fought at the perimeters of Long Binh and repelled the onslaught.

Area of Operations: South Saigon
The Tet Offensive proved to be the ultimate test for the 199th. On Janurary 31, the Vietcang had taken Phu Tho Racetrack in Cholon within the city limits of Saigon. The Vietcong were well dug in and also controlled an area 6 blocks around the track. Phu Tho Racetrack is an arena sized facility famous for horse racing in Indochina. Fighting was from house to house throughout Cholon as the Communists held the upper hand and repelled the attack. The 199th sustained heavey losses and regrouped the following day with a new strategy. Fanning out around the racetrack the 199th came in from all sides. After six nonstop days of bloody fighting the Vietcong, either killed or escaped, were ousted and the racetrack was secure on Feruary 5. Although Cholon was secure the fighting continued for the rest of the month. In one of the final aftershocks of the Cholon slaughter Nguyen Loan, a Vietnamese police general, was caught on film executing a suspected Vietcong prisoner. This image became one of the most famous images of the Vietnam War and fueled outrage around the world. 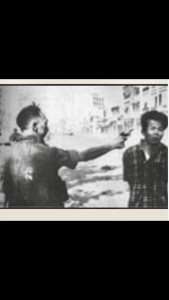 Phu Tho Racetrack, fighting was from alcove to alcove. 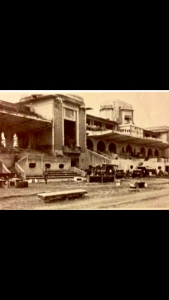 Area of Operation: Mekong Delta/Saigon
Operation Toan Thang was an area of operation patrolled by a combined task force. The 1st, 9th,25th, and 199th infantry units were deployed to counter what was to be known as “The Mini Tet”. The Vietcong had infiltrated the city limits and held key locations. The most serious threat came as two Vietcong battalions captured the Y-Bridge linking downtown Saigon with the Nha Be District. It took 6 days of hard fighting for the Americans to secure this vital artery leaving it the most costly action of “The Mini Tet”.

As the summer months approached and the Tet Offensive came to an end the 199th was reassigned to the Vietnam-Cambodian border on search-and-destroy missions on the Ho Chi Minh Trail. From The Pineapple and The Plain of Reids to the City of An Loc the 199th was targeted by Vietcong forces on a daily basis. At one point my unit was in contact with the enemy for 44 straight days ending in a human wave onslaught outside the city of An Loc.