Home »Most Recent»5. ANATOMY OF A MOVEMENT, LAOS

Laos finds itself in the most unusual situation of being surrounded by almost everyone in Southeast Asia. China, Vietnam, Cambodia, Thailand, and Myanmar (Burma) border this small country thus leaving it strategically and culturally vital to the region. Inhabited by rice cultivators in the lower lying areas and dozens of tribes in the higher elevations it has a diverse population. Largely Buddhists in the towns the highlanders divide their lineage amongst the surrounding countries and are mainly animists.

Signing the protectorate agreement in Hue City Vietnam in 1884 the French took control of all territory on the western bank of the Mekong River. Over the next 75 years France would slowly relinquish control of Laos to the emperor in Vientiane. In 1947, the king of Luang Prabang, unified the country and became king of Laos.

By 1957 factions opposing the U.S. backed royal government began uprising causing the U.S. aid money to be diverted to a clandestine military aid mission. By 1960 the military staged a coup and a new government was established. Rifts continued throughout the government until 1960 when U.S. supplied forces attacked Vientiane against leftist opposition armed with munitions flown in by Soviet aircraft from Hanoi. Russian aircraft continued to drop supplies as the Leftists captured The Plain of Jars. The U.S. adamantly protested the entrance of the Soviet Union in Laotian affairs. In 1961 to further complicate the issues North Vietnamese troops openly fight on the side of the leftists as a Communist backed Hanoi enters the dispute. As the Cold War escalates this action becomes the beginning of the longest running war in American history to date, the war in Southeast Asia.

As the conflict escalates a U.S. backed Royal Government continues to receive aid. Money and munitions flow into Laos as the Rightist backed Royal Government controls the west side of the Mekong River. East belongs to the leftist, backed by a Communist Hanoi, It then sends troops and supplies over the rugged Truong Son Mountain Range. Communist troops were sent to build staging areas, depots, and command posts along an ancient system of footpaths and roads. As time goes by the Communists trying to widen their grip begin infiltrating south towards Vietnam. To accommodate the influx of ever increasing troops and supplies the trail segments were widened as bicycles were introduced to carry needed equipment. By reinforcing the frames these bicycles could carry loads between 220 and 330 pounds and on occasions much more. At times it appeared to resemble an army of ants working silently and diligently focused on a mission.

Hanoi continued to expand the trail and by 1962 had 5,000 troops working on it. The road now stretched 600 miles south through Laos approaching Cambodia. Nearly totally hidden from arial observation the bicycles dropped off supplies as trucks took over. This was the beginning of what would become the infamous and highly fought over Ho Chi Minh Trail. 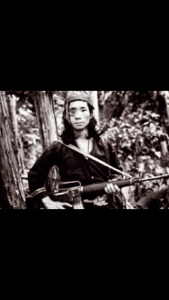 Reinforced bicycles loaded with supplies make their way into Laos from Hanoi. As the Monsoons flood the trails these diligent leftist troops continue undaunted. Hanoi’s supplies continued heading south until the end of the war. 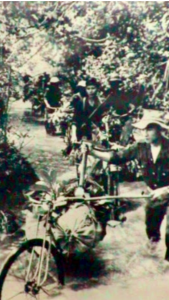 Clearly visible these weapons are being transported by bicycle making this the beginning of a covert guirrilla style war.