Home »Most Recent»8. ANATOMY OF A MOVEMENT, SEX DRUGS and ROCK N ROLL

Sex-Drugs-Rock n Roll was not just an American pastime but a way of life in Vientiane. As Bangkok boasted the first Go-Go Dancers Vientiane boasted Hippy Communes and Hippy culture as early as the mid-sixties. These Hippy student artists were not in Ventiane to protest the war, as stateside hippies did, these dropouts of society were here for the opium and marihuana. In Vientiane protesting the war was fruitless even if you were inclined to do so. The Secret Wars, the Laotian Civil War, Vietnam, the CIA, the invasion of Hanoi or China or France, pick one and you could protest to your hearts content. It was more advantageous to simply blend in and get high. Communes, nightclubs, and opium dens catered to an array of young Americans that found their way to this free love and drug paradise. Under the guise of art and culture many students from around the world joined Americans in a love and drugfest Vientiane.

Typical psychedelic decor for the sixties this commune was commonplace in Vientiane. 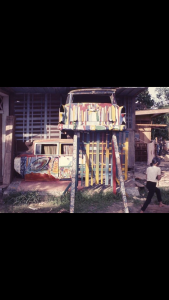 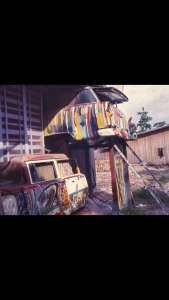 All of Southeast Asia was flooded with drugs of every kind. Heroin, Cocaine, Morphine, and Marijuana were all accessible and of the highest quality. This Opium Den was an acceptable social phenomenon and frequented by hippies and soldiers alike. 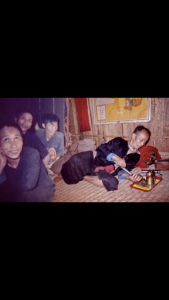 “The Third Eye” a nightclub with psychedelic decor was a popular scene in many clubs in Vientiane. 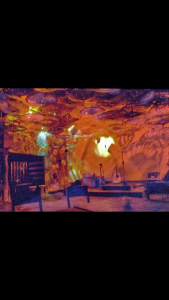 In the middle of this chaos we called Southeast Asia there will be eventually 40 countries involved in the Vietnam War, The Secret War, and the killings in Cambodia making it the most chaotic and confusing battlefield in the history of warfare. If you add a Hippy culture, opium dens, young lonely soldiers, and an abundance of drugs you have the makings of a serious problem.

Drugs were not only a civilian pastime but a war problem as we’ll. From 1968 to the end of the Vietnam War the Department of Defense estimated that 70 percent of U.S. servicemen used some sort of illegal drug. Cheap and available to most servicemen it was a distraction from the mundane life of war especially among combat soldiers.

It was called Firebase Jeannie and it offered little more than the rice paddies we saw on missions. On rare occasions we were allowed in camp when we were not out on search and destroy missions or setting up a six man night ambush. This camp was nothing more than dug out holes in the ground with metal half-pipes covered in sandbags but there was safety in numbers and we welcomed the change. Relaxing was not on the agenda so we grabbed a bite to eat and immediately went on guard duty. As luck would have it Peter and I were elected for the first shift. We had a bad reputation even by Delta’s standards so it was poor judgement asking us knowing we just came out of the field.

It was a typical Vietnam balmy night and the air was perfectly still. After an hour of nothing but looking at each other we relaxed. Being out in the bush countless days, pulling guard duty was the last thing we wanted and boredom set in fast. We decided to get high. Obtaining pot (marijuana) was not a problem, most of the men in our unit carried a bag. As we lit up our first joint a cloud of smoke hung in the night air above us like a comic strip character with bubble thoughts. The air was heavy so it remained still drawing the attention of the captain who now hunted us down. Reprimanding us and threatening to give us a Court Marshal (Army trial) he ranted and raved about legality as he flared his hands in the air.

We yes sired and no sired him as we put out the joint and promised to behave. Watcging him walk away into the darkness and out of sight we reignited our joint and began creating another bubble cloud. This time the cloud was even bigger and thicker as we tryed to see through it and keep an eye on the perimeter. Perhaps it was our lack of attention to detail but suddenly there he was again fighting his way through the cloud. He appeared to be yelling but the sound was distant and the level not so intense. He made his case once again and once again he vanished as quickly as he appeared.

He should have pulled guard duty himself because on his third visit he had spent almost as much time out there as we did. Having a change of heart about his approach he implored us to please stop siting the excuse that he himself would get into trouble. At that point the humor of the situation was clear, at least to us, so we began to make our case. We were in hell by any stretch of the imagination so what would be our punishment, perhaps you are going to send us home we asked? At that point he simply left us alone to carry on.

Most soldiers in my unit were 18 or 19 years old and living on the edge of disaster. Given the power of a gun and the training to kill on a moments notice was almost to much for young minds to understand. Speaking for myself, I had no fear of anything and the thought of being told what to do then threaghtened was not computing in my mind. Drugs in most cases were a distraction from the death and cheapness of life we called Vietnam.

Firebase Jeannie was little more than dug out holes and sandbag bunkers. Here I am cooking dinner in an old can I found with my Bowie knife, probably powered eggs and canned hot dogs. 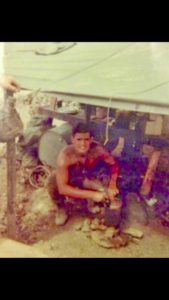 Sometimes I had my boots on for a week or more in water and mud so you can imagine how good it felt to air out my feet. Posing with a grenade launcher I am standing in front of the bunker we pulled guard duty on. I had this jacket specially made to carry two dozen grenades. Add the flak jacket, helmet, food, munitions and M-16 to a one hundred degree day and it was a heavy load to carry. 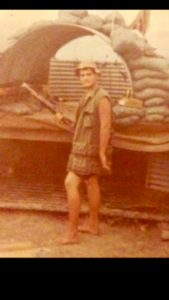