THE FALL OF SAIGON

April 2015 celebrates the 40 year anniversary of THE FALL OF SAIGON and throughout the month of April I will be posting stories directly from my Blog: Gotmysecondwind.org pertaining to the event. Recently during my travels in Southeast Asia I was fortunate enough to revisit Saigon (Ho Chi Minh City) after more than 45 years and write about some of the changes I experienced

The 25 year anniversary of THE FALL OF SAIGON was a remarkable time for me. It had been 32 years since my first involvement in the war and my work was just beginning to receive public attention. I had been creating artwork for almost ten years and after its discovery my work took on a life of its own. Originally created as a cartharsis medium for my trauma my art was not originally meant for public scrutiny and so I hid it from sight. Upon its discovery newspapers dubbed it “CLOSET ART” for it’s Post Trauma healing qualities as my work began to take on historical significance. 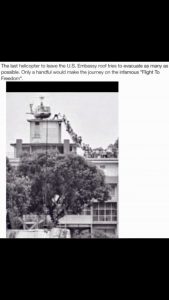 April 30, 2000 began a series of events that would change my life. Beginning with the rededication of New York City’s Vietnam Veteran Memorial the events grew in importance throughout the following months. In May I worked in conjunction with Australian Vietnam Veteran artists on a world tour and hosted them for five weeks in the New York tri-state area.

I was honored for my work by the Australian Government at their embassy in Washington. 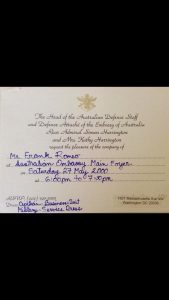 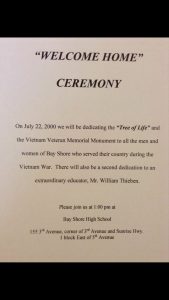 The “TREE OF LIFE” and accompanying monument were unveiled and remain there today.

I was privileged to represent all veterans from the Vietnam Era and gave a speech on the front steps of the High School to an estimated crowd of 600. 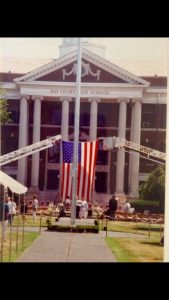 Going back to where it all began and represent my peers while speaking to fellow veterans I concider to be my finest hour. As part of my speech I shared the following story. 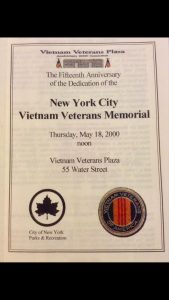 April 30, 2000 I sat on a folding chair in the second row. The first row was reserved for New York City’s elite and so I knew my place. In front of me was Mayor Giuliani, Donald Trump, General Steele, and a host of equally important people well known in areas of government, finance, and the military. Celebrating the 25 Year Anniversary of the Fall Of Saigon and rededicating the New York City Vietnam Veterans Memorial we all gathered on Water Street in what was known as Vietnam Veterans Plaza.

One by one they spoke of bravery by our veterans and the meaning of sacrifice as they introduced Medal Of Honor recipients. They all spoke of similar issues while telling their story of men that rose to heroic levels and of a brotherhood that they were privy to. On and on the day went until the last speaker approached the podium. Sitting on the edge of my seat I leaned forward obnoxiously intrusive of the special guests in front of me. The pompousness of the previous speakers soon dissipated as all went quiet. This is what I came for.

She was frail and in her mid thirties with two small children by her side. Her voice was almost a whisper and hard to hear but her words were strong and full of life with a spirit unmatched in my lifetime. She was direct and to the point about a life of agony, pain, and triumph.

She was one of two children that grew up in Saigon during the war with other American children and had the benefit of the best that Vietnam had to offer. Towards the end of the war her father tried without success to get the family out. As total chaos ruled the streets of Saigon in mid April tens of thousands of Vietnamese tried to get transportation by any means possible. The final days were winding down and mass hysteria ruled the psyche of every South Vietnamese family.

On April 30, 1975 her father took her and her younger brother to the gates of the U.S. Embassy and joined tens of thousands of people crying for help. The gates were locked and those that could get close began to climb. For a split second the mob listed to one side and an opening appeared. Without hesitation her father selflessly pusher them through the medal picked bars of the gate. There was no time for goodbyes only the struggle for life in a sea of trauma and pain. She held her brothers hand as tightly as she could and slipped through the desperate mob until it was impossible to pass. She pushed and slithered trying to find passage and lost her grip. Her brother was missing in the crowd and she was now being forced to move with the ebb and flow of the masses. Without resistance the strength of so many controlled her movement as she found her way to the top of the embassy roof. She was on the last helicopter to leave Saigon, only eleven years old and alone she was on “The Flight To Freedom”.

I stood in awe of both her and the human spirit as I shrunk in comparison to the life of this woman half my age. She towered over me in a deity sort of way when I approached her and we talked. I was shaking when I shook her hand and felt her spirit as she thanked me for my service looking down at her two children. Through them her family lives on I thought and like all of us she moves forward carrying the past.