Home »Most Recent»10. ANATOMY OF A MOVEMENT, RIVER PATROL

River patrol, “Riverine Patrol”,was not a new concept in Vietnam and so the Vietcong were familiar with the tactics after the French used many of the same ideas during the Indo-China War. The Mekong Delta Mobile Afloat Force was an all weather “strike force” capable of actively pursuing vietcong units not just in the delta but up river as well. Strategically important during the Tet Offensive the unit helped blockade Saigon from attack. The U.S. Riverine Patrol tactics had not been seen or used since the War of 1812 in the Mississippi Delta and Sino-American operations in WWII in the Nile Delta. The Mekong Delta provided a perfect venue for both sides to conduct river warfare.

Called the “Brown Water Navy” it was conducted as a joint venture of U.S. Navy and U.S. Army operations. A wide range of craft included everything from air boats (Everglades style) to large Cutters (Coast Guard style) but the most popular was the LCM. The LCM, left over from WWII, was a troop transport converted into a monitor class vessel. A monitor class ship is a small warship that carries disproportionately large guns and munitions and had little armor. The LCM’S patrolled up and down the river usually during high tide or high water level. They had less capability during the dry season and were limited to deep water ares.

Here an LCM passes our area of operations. It’s a welcomed site to see one of those working our end of the river. That soldier wouldn’t be casually hanging over the side of the vessel if they were not being secured by our unit.

River patrol was dangerous from beginning to end, just getting ready was a tedious job. Here one member of our unit stands guard as the others load up for operations, I snapped photos. 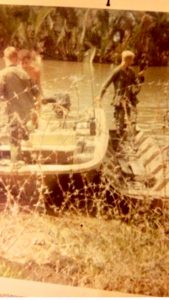 Patrolling waterways took on many phases and intelligence from local villagers suggested that a cache of munitions was hidden on the river bottom. Delta was called upon to search the depths and I was called upon to do the dirty work. This particular maneuver is a good example of being 18 years old and invincible. Feeling this way was part of our survival skills but in this instance it was not a good idea to jump into the unknown. The Mekong was full of nutrient rich silt the light couldn’t penetrate and under that dark murky water could lie anything from mines to bamboo shoot booby traps. River patrol however did have it’s perks and one favorite pastime was dropping a concussion grenade in the murky water. It took a few seconds to get to the bottom and detonate. The pressure of the blast would stun the fish and they would float to the top.

Peter took this picture of me diving into the river from a foot bridge. 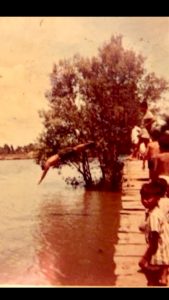 I pulled these rockets with Chinese markings from the bottom of the river along with a sniper rifle and munitions. A sniper rifle on the river in the hands of a Vietcong sharpshooter could be disastrous. 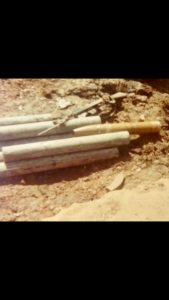 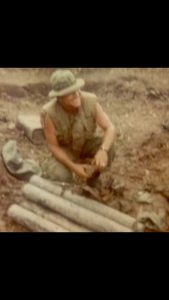