ANATOMY OF A MOVEMENT

Frank Romeo…..”to understand my trauma and the conception and growth of PTSD as we know it today you must understand the history behind the Vietnam Era. The Baby Boomers birth, growth, and legacy find its roots during this period of insight, growth, and pain. The world was changing not by the day but by the hour and it had never seen such change…..”

To understand the Vietnam Era or the will and inner strength of the Vietnamese people you must understand their history. Dominated by China for a thousand years the French set up shop in the late 1800’s. In 1887 Paris formed French Indochina, it was ruled by a French governor responsible to the Ministries of the Colonies in Paris. Salaries consumed most of the colonial budget and little was left for education or public improvement yet Indo-China would prove to be France’s richest colony.

The Japanese arrive in Indo-China in 1940 and France, having its hands full with WWII, was in no position to object. It was Japan’s 1941 move into the area that brought United States attention to the war. With Japan’s long range bombers able to reach the Philippines the U.S. and other European countries imposed an embargo on scrap iron and oil to Japan. This decision caused Tokyo to embark on war with the U.S.

After the surrender of Japan the French moved back into the southern half of Indo-China while the north was left vacant of any dominant government. The 16th parallel set forth by the 1945 Potsdam Agreement was the line of demarcation later known as the demilitarized zone or DMZ when moved to the 17th parallel. Ho Chi Minh seizing the opportunity moved into a vacated north declaring himself president of a free Vietnam. The French not sitting by idly would not relinquish their former colony without a fight. For Ho Chi Minh the war began in December 1945 following the shelling of Hai Phong Harbor by the French. Including American involvement, the fighting for Ho Chi Minh and the Vietnamese people would last another 29 years, the longest conflict in the twentieth century.

Eventually the French growing war weary began slowing its pace leavinbhg a traumatized and ravished Indo-China on the world stage. The United Nations Commission for Asia and the Far East (ECAFE) initiated a project in 1957 to develop the area. The Mekong River Project would benefit 17 million people living along its 2,625 mile long length but had to be voted on. Only Burma and Democratic Republic of Vietnam (DRV-north) would reject the proposal. In total 26 nations would become involved in the project including the United States setting the stage for yet more intrusions by outside interests.

The 1954 the Geneva Conference ended the Indo-China War and set the 17 parallel as the new line of demarcation allowing Ho Chi Minh to establish a presence in the North while Emperor Bao Dai dominated the south. Bao Dai living the good life in France had no desire to return to a hostile Vietnam. He appointed Ngo Dinh Diem, a Catholic leader, to head the new government. Bao Dai believed the United States would back a Catholic leader as an alternative to communist Ho Chi Minh. He was right and on July 7, 1954 a new government was officially formed that technically encompassed all of Vietnam. Ho Chi Minh reluctant to recognize the new government called it a puppet regime of the U.S. and set the stage for the next 25 years of conflict.

Dulles and Nixon’s findings support a growing concern
over Communism as the problem gets turned over to
the Kennedy Administration. 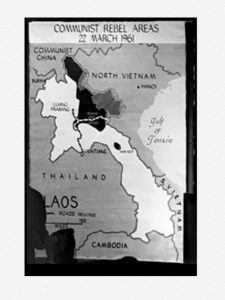 Kennedy using this map as a power point presentation
drives home his concerns over a growing threat. 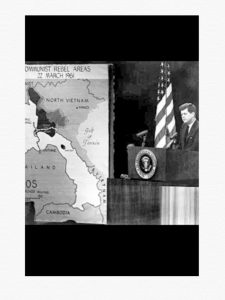 Diem proved to be less than accurate with U.S. finances and little was used to improve community development. He spent most of it in the cities and little on the working people where most of the population was concentrated. Between 1955 and 1960 less than 2% of U.S. aid to Saigon went to reform and opposition to Diem was growing in South Vietnam.

Kennedy having second thoughts about Diem increased Special Forces presence in Vietnam and sent Vice-President Johnson to evaluate the situation. In May, 1961, less than a week after Johnson’s return Kennedy increased the size of the South Vietnamese army by 100,000 men. Being poorly trained and inadequate Kennedy also dramatically increased U.S. military presence in South Vietnam.

Growing tensions in the Diem government increased as Henry Cabot Lodge in cooperation with the CIA learned of a pending coup by Diem’s generals. At the end of August 1963 Washington assured the Generals of its support as Kennedy publicly criticized Diem. Washington cut off finances to the Diem government and on November 1, 1963 a coup, that was both swift and accurate, murdered Diem and his staff. Diem’s death began a period of political instability that would last a decade. Washington under President Kennedy had sanctioned a coup and thrust America into it’s longest war to date.

Hanoi followed the political upheaval in the south with keen interest and at a time when the south was most vulnerable decided it was time to act. In 1963, changing its position drastically, Hanoi sent notherners to the south to equip the rebels with new Communist arms. The war was escalating and in March 1964 Secretary of State McNamara visited Vietnam and vowed support for the new government headed by Khanh. McNamara reported to President Johnson that 40% of the countryside was under Vietcong control. Johnson was now sending over $2 million a day and little of it went to public works. Again in June 1965 the South Vietnamese government collapses and a new military leader Nguyen Van Thieu took control.

America is becoming more and more restless with the
growing prospects of war and is not afraid to voice its opinion. 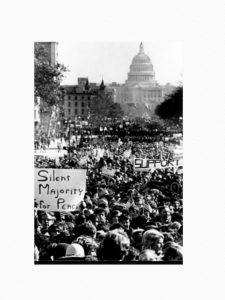 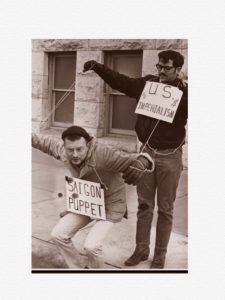 In July 1964 the U.S. Navy destroyer Maddox started a reconnaissance patrol off the coast of North Vietnam. At the same time in the same area covert operations, using small vessels manned by Vietnamese but under U.S. control, were to take place on North Vietnamese sites. Learning of this operation North Vietnam retaliated with an unsuccessful counter attack. On August 2 three North Vietnamese torpedo boats unsuccessful attacked the Maddox. President Johnson using this attack immediately ordered air strikes on North Vietnam. In congress he asked for and immediately got approval to begin retaliatory measures as The Tonkin Gulf Resolution was passed. Operation Pierce Arrow began its bombing campaign and war had begun. The Tonkin Gulf Incident was politically profitable for Johnson in the beginning and polls showed an overwhelming support for his handling of the situation. With no ships sunk or casualties incurred the U.S. was thrust into one of the longest, ugliest, and costly wars in its history.

The first U.S. combat troops arrive in South Vietnam in March 1965 to defend Da Nang airfield. U.S. Army troops soon follow and by the end of 1965 there are nearly a quarter of a million U.S. personnel in South Vietnam.

As the U.S. war machine began to flex it’s muscles new
recruits were needed and the draft was instituted. This
began a long legal battle that questioned our very Constitution.
Here World Heavy Weight Champ Cassius Clay becomes a
Muslim and changes his name to Muhammad Ali. Siting
religious reasons he refuses to enter the military. 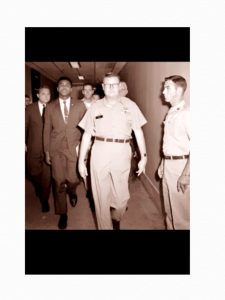 Ho Chi Minh, Uncle Ho as he was fondly called, was the
inspirational, religious, and military leader of North Vietnam.

As tensions and unrest grew a number of influential
celebrities began their own anti war movement. None
more controversial than Jane Fonda, better known as
Hanoi Jane, takes matters into her own hands. Fonda
actually went to North Vietnam and mocked the U.S.
war effort. Her legacy of sleeping with the enemy
follows her to this day. 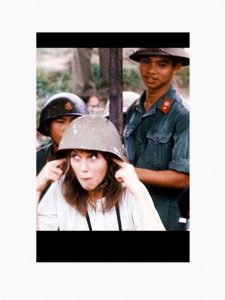 The French imposed Catholicism on the Vietnamese as
did the U.S. and tried to convert as many Buddhists as
possible by disrupting their practice any way possible.
During U.S. involvement only 20% of Vietnamese
claimed to be Buddhism but secretly almost 80% of the
country were practicing Buddhism. Here, in objection
to Buddhist suppression, a Monk lites himself on fire
in self immolation. 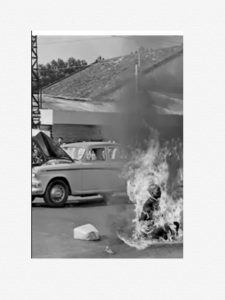 The anti war movement growing in strength begins
to react in unison as Peace and Music come together
to create a happening. 1969 Woodstock Festival, NY. 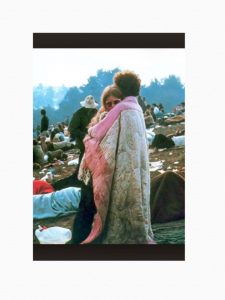 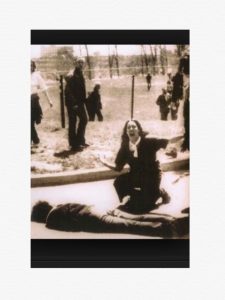 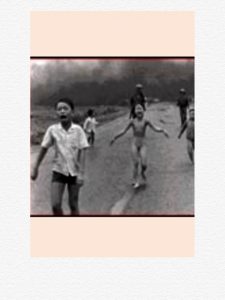 To aggravate the frustration of a defiant people the war
pits brother against brother. Here a South Vietnamese
Police Officer is caught executing a suspected Vietcong.

In 1975 the war draws to an end as countless civilians try to
escape the chaos. As the Communist storm Saigon
a bloodbath incurs and leaves the city defenseless.
This was the last American helicopter to leave the
American Embassy rooftop. 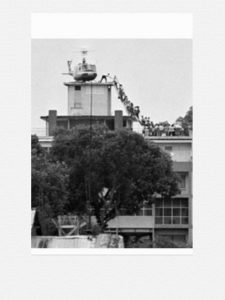 ON APRIL 30, 1975 THE WAR IS OVER AND ENDS U. S. INVOLMENT IN THE AREA. TO DATE, THE UNITED STATES HAD BEEN INVOLVED IN THE AFFAIRS IN SOUTHEAST ASIA FOR ALMOST 30 YEARS!