As civil unrest escalates and sides are drawn the Ho Chi Minh Trail takes on a more difinitive roll. Between 1962 and 1963 the trail increases it’s southward expansion into Cambodia as North Vietnamese soldiers infiltrate South Vietnam. Still supporting the Royal Lao Government and fearful of impending Vietnamese invasion of the south the U.S. changes its foreign policy and begins direct involvement.

The Secret Wars were just that, a war that no one talked about. The Secret Wars are the deadliest and most fierce campaigns ever anitiated by one country against another. The U.S. trying to interdict traffic along the Ho Chi Minh Trail begins a relentless bombing campaign. From 1964 to 1973 the U.S. dropped more than two million tons of bombs on Laos. Conducting more than 580,000 sorties, (one plane one mission), it equates to a plane load of bombs every 8 minutes, 24/7, for 9 years making Laos the most bombed country per capita in the history of the world. Justification for such a genocidal act began to take shape in the confines of the Cold War, the civil war in Laos, impending civil war in Vietnam, and the Communist aggression  in Southeast Asia.

At one point most of the landscape outside of the larger cities looked like this. Carpet bombing, cluster bombing, and artillery barrages made a moonscape of Laos. 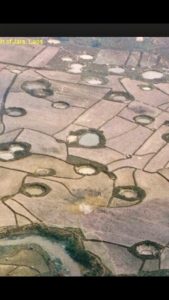 In 1962 President Kennedy and Nikita Krushchev leader of the USSR meet in Vienna to discuss, among other events, a neutral Laos. Agreeing on a policy of neutrality they focused on Vietnam. As China steps up its rhetoric and continues to supply North Vietnam with supplies the U.S. finds Beijing’s influence on the meeting disheartening and steps up its bombing campaign. In turn the USSR increases it’s munitions and supplies to the Leftist Laotian army by way of Hanoi. For the next twelve years each mega-power’s position would eventually draw 40 nations into the war in Southeast Asia. In December 1975 Laos’s 600 year old monarchy would fall to the Lao People’s Democratic Republic.

The Secret Wars, besides being a secret, had the dubious distinction of being the war with the most UXO (unexploded ordinance). Laos is contaminated with UXO’s as almost one third of the ordinance dropped on it did not explode. These unexploded bombs periodically go off and approximately 20,000 people have been killed since the bombings ended. The legacy of the Secret Wars is not just the UXO’s it’s the Laotian people themselves. When the U.S. withdrew hundred’s of thousands of refugees fled the country and settled in America.

American UXO’s found and disarmed amounting to only one percent of
bombs dropped. The rest remain live throughout the countryside. 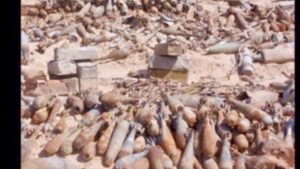 Cluster Bombs, one large bomb containing hundreds is smaller bombs that shoot out after the larger one is detonated causing damage in all direction. 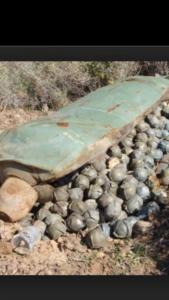 Part of a downed U.S. war plane sits alongside a
river as part of a landscape of days gone by. 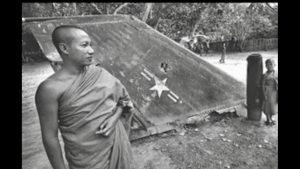 As all civil wars dictate it pits brother against brother. Here captured
Leftist guerrillas plead for mercy from their fellow countrymen. 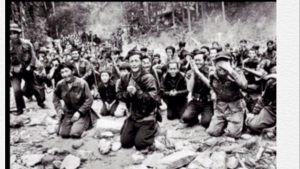 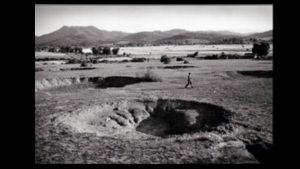