OPERATION RANCH HAND
Between 1962 and 1971 the U.S. dumped more than 10.6 million gallons of herbicide on Southeast Asia in order to deprive the enemy of ground cover provided by dense jungles and foliage. This massive defoliating project was called “Operation Ranch Hand,” and was successful in defoliating an area the size of Massachusetts. Agent Orange, so named because it was shipped in orange striped 55-gallon drums, was sprayed from fixed and rotary wing aircraft. Agent Orange was also sprayed from trucks and backpacks to defoliate base camp perimeters, landing zones, and other areas. It is estimated that 2.4 million Americans were in Vietnam during Operation Ranch Hand. Ground forces were in areas during and immediately after spraying while others actually handled Agent Orange. 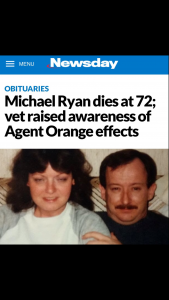 In 1978 veterans began demanding that something be done. A Veterans Administration employee at the Chicago Regional Office Maude DeVictor began gathering information on the issue and was instrumental in generating publicity that opened the problem to public scrutiny.

Michael Ryan served a thirteen month tour of duty in Vietnam from August 1966 thru September 1967 in an area contaminated with Agent Orange. Upon returning home Michael, a police officer in Suffolk County New York, and wife Maureen had their second child in 1971. Kerry Ryan was born with multiple birth defects and sustained a life of wheelchairs, hospitals, and relentless setbacks in an otherwise bedridden state. Kerry died in 2006 of kidney failure associated with second generation birth defects associated with Agent Orange.

Michael and Kerry began what would become a decade long fight of public awareness and a three and a half decade long fight for survival. In 1979 and 1980 respectively the Ryan’s were named in a class action lawsuit against Dow Chemicals, the maker of Agent Orange, and gaining national support travelled to Washington and testified before Congress. Michael and Kerry both wheelchair bound fought tiredlessly for government acknowledgement of Agent Orange issues for veterans. Kerry Ryan became a poster child for veterans rights. In 1982 the Ryan’s wrote a book, “Kerry: Agent Orange and an American Family.”

On the left Michael stands vigil at Kerry’s bedside in 2006 and on the right decades earlier they testify before congress for veterans rights. 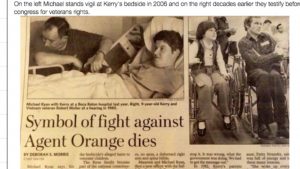 On May 7, 1984 all parties concerned in the litigation agreed to an out of court settlement. “Agent Orange” Product Liability Litigation was brought before Federal Judge Jack B. Weinstein in the Eastern District of New York. The defendant chemical companies agreed to pay $180 million to the plaintiffs which was comprised of Vietnam Veterans and their families. Various appeals delayed the distribution of the settlement fund for over four years and during that period the settlement grew to $240 million. It took ten years to distribute the funds fairly. A case by case solution was established to determine the amount to issue and study the effects of Agent Orange. Unfortunately veterans and their children were suffering and in some cases dying during this time.

Gina Marie Romeo, my youngest child, was born in 1995 the final year of the Agent Orange funds distribution but it would not be until several years later that we discovered the extent of her condition. She was hearing impaired with auditory processing disorders. At the time it never occurred to me to connect the dots and retrace my footsteps back through Vietnam pinpointing actual locations of my service. Gina Marie was my second child exhibiting similar symptoms along with additional birth defects in another. Having two children with similar conditions from separate mothers was to much of a coincidence and I began to investigate and fight on their behalf.

I subpoenaed my military and medical records and retraced my history back through Vietnam and specific area’s of operation. The triple canopy jungle along the Vietnam Cambodian border where I carried out specific missions was the most contaminated and heavily sprayed area in all Southeast Asia. 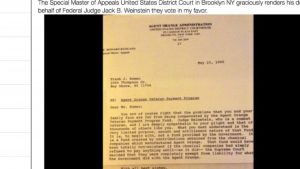 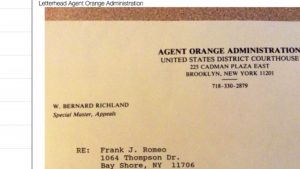 In 1995 I filed my sixth case against entities related in some way to my Vietnam experience and for the sixth time I was successful. Monetary gain was not the driving force behind my quest but rather a sense of responsibility and accountability against all parties concerned. It seems my life has been an uphill fight for survival ever since I could remember and has been the mantra for my existence. The war was brought to me as a child and has remained a constant physical, psychological, and emotional thorn since it’s inception. The struggle continues not only for veterans but for our children. Vietnam veterans are dying young and yet the legacy carries forward. An event that took place thirty years before my daughters birth will live with her forever and only time will tell if her offspring will bear the scars of the War in Southeast Asia.