Home »Most Recent»9. ANATOMY OF A MOVEMENT, THE MIGHTY MEKONG

The mighty Mekong River flows through almost 3,000 miles of countryside servicing 65 million people with its seasonal flows. These flows, dependent on the annual Monsoons, sustain fisheries, agriculture, ecosystems as well as the culture of the Asian people. Starting its headwaters in Tibet it meanders through China, Myanmar (Burma), Laos, Thailand, Cambodia, and Vietnam emptying its precious cargo of nutrient rich silt into the South China Sea. It is the least modified river system and the second most bio-diverse  in the world after the Amazon.

In 1953 France withdrew all claims in Southeast Asia and the Geneva Conference of 1954 offically ended the war in Indo-China. World attention now focussed on rebuilding the Mekong River Basin and the millions of people dependent on it. The United Nations then created ECAFE (Economic Commission for Asia and the Far East). The Tennessee Valley Authority in the U.S. and the Snowy River Project in Australia proved to be successful examples of irrigation, navigational, and hydroelectric endevors that could be utilized on the Mekong. Larger in scope the Mekong River Project was expected to take 20 years to complete. By 1970, in addition to 26 nations, private organizations such as World Bank and The Ford Foundation built three multipurpose dams.

Strategically the Mekong was of vital importance in all aspects of the war. Flowing through Laos, Cambodia, and Vietnam it was a staging area for Vietcong offenses and the flow of munitions and men. The Mekong Delta saw some of the bloodiest fighting of the war. Besides it’s overall size the number of tributaries and waterways was overwhelming for the Allied Forces to contend with. Airboats, Everglades style, and small Boston Whalers were used to patrol the waterways leaving soldiers volnurable to attack. 50 and 60 caliber machine guns were mounted on these vessels to insure safe passage. It was a scary proposition when you drew orders for river patrol knowing you were out there all alone. Behind every tree and around every bend there could be Vietcong and the possibility of an attack. It was nerve racking  duty but a necessity and someone had to it. As usual Delta was called upon for its expertise in dealing with the rediculous and taking care of the jobs that nobody wanted. We alternated between patrolling the rivers by day and ambushes by night. We had a full schedule.

Patrolling the Mekong was a scary job. Overgrown banks were a perfect hiding place for Vietcong snipers or Claymore mines. I was on the 60 caliber machine gun when I took this picture on our way up river to a suspected Vietcong village. 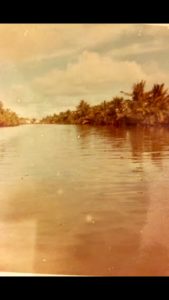 Being aware of anything and everything you had no time to enjoy the beautiful scenery. This innocent scene may hide danger and there were occasions we found rockets or munitions under their cargo of rice.

Pulling alongside a suspected boatload of munitions calls for vigilance. This boat contained rockets with Chinese markings, an AK-47, and munitions. 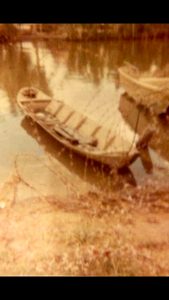 Working with South Vietnamese soldiers could also be risky. Being paranoid was part of the job and not trusting anyone was the norm. These two  soldiers were once Vietcong but surrendered and were repatriotised. They now worked for us giving us more to think about and contend with. I became friends with these two ex-vietcong but slept with one eye open. 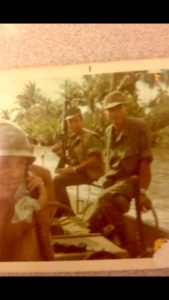 Overloaded and sluggish in the water this boat was ideal for an enemy attack. One spray of machine gun fire or a mine could easily wipe out 10 men. A few of us got off for a night ambush and immediately set up ground cover if necessary. We watched as long as we could until they were out of sight then we were both on our own. 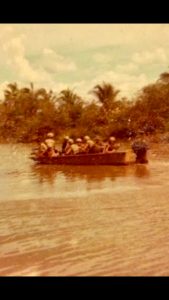 Day in and day out the rockets were battering the small outposts and camps along the river keeping our sister units on alert and interfering with our nightly missions. Determining their exact origin was always difficult but common sense told us it was coming from the heavy mangrove of foliage upriver. The heavy growth provided good coverage and was easily accessable from all the fishing villages along the river which harbored Vietcong. Most operations taking place close to any villages or our camp were off limits to air strikes so we were stuck with the nightly barrage of rockets.

Orders came down from Headquarters alerting us to what we already knew along with orders to take the entire area and destroy the tree line. Helicopters would drop off explosives in the form of Bangalore Torpedos and Det Cord (Detination Cord) in the morning to be used in the mission. Bangalore Topedos were long tubes of plastic explosives similar in shape and size to eight foot long fluorescent light bulbs. They were most often used to slide into tight areas like barbed wire or undergrowth. Det Cord or Detination Cord looked like clothes line but was a plastic explosive used to connect the torpedos for multiple explosions. Trained in these types of operations our Jack-Of-All-Trades demeanor kept us busy with more work than we could handle.

It was easier to carry cases of torpedoes rather than opening them up and the Det Cord could be carried in our backpacks so all our gear was left behind with the exception of guns, ammo, rope and carabiner hooks to make room for the explosives. Six men in hostile territory were overloaded with weight and ordered to take down an area the length of a football field on the other side of the river. No one would tell us how to to get the job done because that was up to us and even if they did we were going to do it our own way so we decided on a plan.

One of us had to swim across the river alone with one end of the rope so the second man could come across floating the explosives attached with carabiner hooks to the line. The other four men secured the area as best they could. It was decided that I would be the first to cross the river followed by Peter.

Stripping down to my camouflage underwear  and boots I walked upstream to compensate for the current and dove into the water with one end of the rope tied around my waist carrying only a knife. The others knew if I was fired upon I would dive and they were to pull me back while returning fire. I was careful to come ashore quietly until I could secure the rope and signal Peter to begin his crossing. Angling the rope to allow the current to help push the equipment across I secured it downriver slightly. Although this part of the operation was quick I was vulnerable without a weapon and it seemed to take forever. Peter, the explosives, and our weapons followed each other like a laundry list of objects stretched out in single file.

Taken turns on guard we spaced the torpedoes fifteen to twenty feet apart connecting each of them with Det Cord in strategic areas. The cord went in one end of the tube and out the other and would explode simultaneously making one big explosion. With about a hundred feet of cord left we decided to wrap all of it around the base of a palm tree for some personal entertainment so we didn’t have to carry it back.  An explosion stretched out over such a long distance could be a problem for our escape and safety was an issue. If we were spotted by the Vietcong we could have a problem and caught on the other side of the river without help and we would have no option but to fight our way out. Our escape route after detonation would be one of three ways; upriver, downriver, or deeper into the heavy mangroves none of which sounded good and we could be trapped. We chose upriver.

Attaching a detonation cap and fuse to the Det Cord wrapped palm tree we lit it and ran for our lives diving behind a mud dyke canal. The explosion would start at the tree and work it’s way toward us along the river bank allowing just enough time for us to witness the result of our handy work before burying our heads. Like a gala of orchestrated pyrotechnics on the 4th of July it went off without a hitch and the only thing missing was the background music of a symphony. Boom, the palm tree flew straight up followed by a succession of blasts as the tree remained airborn until the last explosion crescendoed our concert to its conclusion. Minus the music, it was a work of art.

We were all about special operations that usually called for a steady hand, nerves of steel, and a sense of fearless adventure. When a call came in we were on an operation instantly taking mindless risks. Youth better serving the needs of a wreckless society allows us to be molded into unorthodox shapes and personalities of people on a mission. Young men not having the luxury of developing a sense of remorse and a fear of reality or it’s consequences do not differentiate between a fight and a battle. We attended to our jobs with a sense of accuracy and purpose. I had no fear and that made me both dangerous and invaluable to a war machine with no direction thus I had no direction. I had a job to do and I did it well.