Home »Most Recent»HALL OF FAME

Sydney Cole was an Olympic swimmer in the 1936 Berlin Games until suddenly the team was asked to leave, but he soon returned. Not as a swimmer but as an American Pilot during WWII. When his plane went down behind enemy lines and he was forced to jump his body was riddled with bullets as he parachuted to the ground. He immediately ripper off his “Star of David” and buried it in the ground. He spent the remainder of the war in a German POW camp until he was liberated by the Russians. 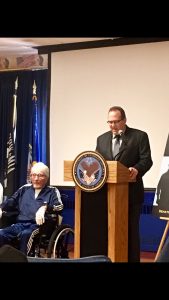 Today, at 103 years old, Sydney was honored in Buffalo NY Veterans Hospital where he lives. Today Sydney Cole entered the New York Senate Veterans Hall Of Fame for his service, courage, and of course longevity.

I learned about his exploits not from the program given out to all guests but from Sydney himself. Today I had the honor of interviewing history. Sydney and I spoke of war and traded stories as old soldiers do. He was eloquent, sharp, and  fisty! I was honored to touch a spirit so strong and powerful it sent shivers right through me. Sir I honor you.

My host for the event was Kim Cich president of “Pinups For A Cause” and western NY director for Walk With Frank campaign. Pinups For A Cause are WWII USO dressed ladies that advocate for veterans. You can find them at any veterans function rallying around the troops as they did 75 years ago. Kim is the founder and president of this national organization.