OPERATION BABYLIFT
History has the unmistakable quality of being reviewed time and again with different outcomes and different stories and different heroes. The Fall Of Saigon was no different as civilian mothers thousands of miles from home take to the air and invade Saigon.

It was called Operation Babylift by the Ford Administration on April 2, 1975 and lasted to the last days of the war. Civilians, nurses, volunteers, and Air Force personnel would fly into Saigon’s Tan Son Nhut Air Base under enemy fire with cargo and civilian aircraft and evacuate as many orphans as possible during the Fall Of Saigon. One aircraft crashed or was shot down killing 138, mostly Vietnamese children, but the remainder went off without incident. Over 3,000 orphans were rescued and 2,600 were adopted by families all over the world. Critics of the war accused the Ford Administration of political manipulation but to no avail. The heroes that stepped forward in those waning hours risked their lives and held the critics at bay by the overall success of the operation.

The numbers evacuated only reflect a fraction of the problem left by the war. “AMERASIAN CHILDREN”, fathered by American servicemen to Vietnamese women, are said to number in the tens of thousands. Known as “the children of dust” they were shunned by Vietnamese society and lived a harsh life.

Boxes of babies are strapped down in cargo planes waiting evacuation. 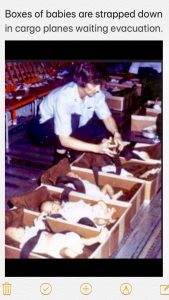 A surreal site of a commercial jetliner full of babies in boxes.

From the dedication of The Cleveland Grey’s Museum, Lincoln’s first unit called to arms, to the Australian Embassy in Washington my work has afforded me the opportunity to speak at many different venues. On occasion I am paired up with another guest speaker performing workshops or historical exhibits in educational settings. It’s not that I disagree or am disappointed with other guests but I feel that most times we’re not on the same page and my message is lost, but not always.

We met at an emporium for administrators and teachers for all school districts in Nassau County Long Island NY and we talked for hours. This frail lady was fifteen years my senior but her energy level was equal to mine. Just an ordinary American housewife and mother she left her family and flew 9,000 miles into the face of enemy fire. Her volunteer organization teamed up with private airlines and crews to evacuate orphans during The Fall Of Saigon. Ordinary mothers with a love for the gift of life manned commercial aircraft to fulfill a destiny. One particular child with a special gleam in his eye went home with her as her own.

I am in awe of most simple things in life but occasionally I am privileged to touch the human spirit itself and when I do I am jolted with a bolt of life giving energy. It usually carries me  just long enough to reach another and if not I search for it in vane. This energy sustains my life. That day was one of those life giving days and I thanked her with tears in my eyes. She knew exactly what I meant. I feed off of this energy to exist and embracing it gives me hope and I am appreciative.