OPERATION FREQUENT WIND
60,000 strong in the eleventh hour of The Fall of Saigon made up of prominent politicians, military leaders, and anyone with U.S. or Saigon connections took to the South China Sea to escape the death throes of the Communists. It was calld Operation Frequent Wind and desparate Vietnamese fled on fishing boats, makeshift vessels, and unseaworthy craft to reach ships of the U.S. Seventh Fleet. Other than U.S. ships refugees made their way to first-asylum countries such as Malayaia, Indonesia, Singapore, the Phillipes, and Hong Kong. In the next two years almost 30,000 more Vietnamese would venture into the unknown and seek asylum despite official reports that an estimated one third of all fleeing Vietnamese would die at sea.

Hords of frantic Vietnamese hug the coastline in anticipation of freedom.

Anything that floats was a possible ticket to freedom.

Ships of the U.S. Seventh Fleet await the boat people. 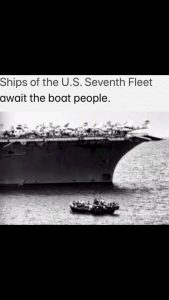